Culture vs. Mandate: How a Company’s Culture Can Erode Its Mandate 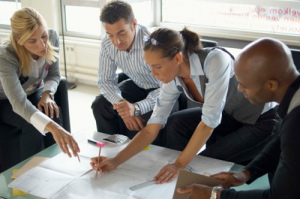 We Are Reaction Machines

We human beings are reaction machines; whatever happens, we react to it. The only choice we have is how we’re going to react. When we’re on “automatic pilot,” by definition we are reacting MINDLESSLY, being run by our default programming. This programming consists of the beliefs we developed, often unconsciously, as we grew up, which are based on our interpretations of the messages our caretakers gave us about the world (for example, “Speak up, it’s the only way you’re going to get what you want” vs. “Don’t speak up, you’ll probably be wrong and embarrass yourself”) and our interpretations of our experiences (whether positive or negative), and especially emotionally traumatic experiences (for example, the death of someone close to us, our parents divorcing, being neglected or emotionally or physically abused).

The beliefs we develop from our interpretations of these messages and experiences become the programming we use in our “operating system,” and when we react on automatic pilot—that is, not making mindful choices about how we will react—they determine our reactions. I call the beliefs that influence our actions our Organizing Principles. When our beliefs don’t support us in our own personal mandate—in other words, in creating the life we want—it’s because these beliefs cause us to act in self-defeating ways that create obstacles to our achieving our goals. The collective beliefs of the people in an organization create the culture of the organization, and when this culture doesn’t support the organization’s mandate, the organization becomes dysfunctional. On a personal level, we see how we are contributing to the organization’s culture by identifying our Organizing Principles. If they are at odds with what we want and are creating internal conflict for us and/or contributing to dysfunction in the organization, we must change these Organizing Principles to new principles that will lead to more appropriate, responsible behavior.

How I Identified My Organizing Principles

I first became aware of my Organizing Principles by observing other people around me and comparing my attitudes with theirs. I noticed, for example, that my former wife generally reacted to new situations with an open and trusting attitude, expecting that everything would be okay, while I was generally anxious in the new situation, always prepared for something to go wrong. I wondered what accounted for the difference.

Talking about it in therapy, I realized that I’d developed the belief “The world isn’t safe. Don’t trust.” I was always expecting another major catastrophe like losing my dad, which happened when I was eleven. Although I wasn’t conscious of it, the belief that I couldn’t trust the world to be safe was one of my Organizing Principles, which meant that when I was on automatic pilot, I’d react based on this belief.

I also developed the Organizing Principles “I must stay in control to be safe” and “No one will take care of my needs but me.” In my personal relationships I was always craving more intimacy and love—that was my personal mission statement, my mandate—and until I recognized these two Organizing Principles, I didn’t see that my actions and reactions were actually pushing people I loved away instead of allowing them to be close to me.

In other words, the culture I unconsciously created was undermining my mandate: How could I be really close to someone if I was always afraid I’d be abandoned by them or that at any minute something would go wrong, that I needed to stay in control of myself and try to control them, and that they couldn’t take care of my needs because only I could? You can see how our Organizing Principles can be dysfunctional for helping us to create the life we want. This is true in our business lives as well.

I used the same ill-chosen beliefs in my early business life. With these beliefs, I felt I needed to be RIGHT all the time; if I encountered disagreement, I would defend my position and even attack others as part of my defense.

As you can imagine, this created unhappiness in the culture of my organization. It also made me unhappy, because people I worked with were more distant from me than I would’ve liked, and I felt isolated and alone.

It was only when I identified my Organizing Principles and understood how they could produce adverse effects that I was able to let go of the belief that I needed to control everything and be RIGHT, and that I realized I needed to be open to options other than those based on my old beliefs and opinions.

I want to emphasize that our Organizing Principles only have power when we don’t recognize what they are and when we allow them to run us. Since the culture of an organization is created by the people in that organization, when its leader and other members are acting on automatic pilot based on their individual Organizing Principles, the culture is going to be dysfunctional, just as when we act on automatic pilot in our personal lives, we are going to act dysfunctionally.

How to Identify Your Organizing Principles

In order to identify your Organizing Principles, I suggest you do it the same way I discovered mine. Compare your attitudes and points of view with those of people around you and see how they differ and what beliefs you have that create those differences. Also look at how you act and react, especially in challenging, stressful situations, and identify the underlying beliefs that cause you to act the way you do. Then think about whether those beliefs—your Organizing Principles—serve you or work against you. Once you begin to identify your beliefs and then recognize them when they are affecting your interpretation of your present circumstance, you will be well down the road to changing them to produce more satisfying results.

Next week, we’re going to look at what we can do to replace our dysfunctional Organizing Principles with new beliefs that will help us create a more fulfilling experience at work as well as in our personal life.
photo credit: pennstatenews via photopin cc