A Life Lesson That Works

Why Do We Make It Personal?

Getting the Most Out of Life in a Digital World

A TV commercial is currently playing in which the camera moves in on a handsome man lying on a chaise lounge at a resort pool. He glances at a teenage girl with her back to him, dangling her feet in the water. We see the teen picking up her cell phone and pressing keys. The camera moves to Mr. Handsome, who 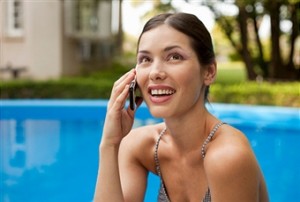 picks up his cell and breaks into a big grin. The camera shifts to his text message, and we read, “Dad, this is a great vacation.”

Wow! Now advertisers are feeding us the idea that kids express their feelings to parents digitally, even if Dad is sitting only ten feet away, instead of, as in this case, communicating gratitude face to face—leaving us, the audience, with the impression that we’re supposed to consider this a warm, close father-daughter moment!

A study released two weeks ago suggests that “parents on smartphones ignore their kids.” Another study found that subjects checked their smartphones 34 times a day because it has become a habit or compulsion, and another found that 68 percent of participants suffered from internet “disconnect anxiety.”

What is it about human beings that makes us subject to this “technology addiction”?

How Our “Radar” Interprets Emails and Texts

I grew up watching World War II movies. Every warship had revolving radar dishes looking for an “incoming bogie”—a term derived from the word boogie in boogieman and meaning a signal that an unidentified and probably hostile aircraft was approaching. We’d see a crewmember scan his radar screen for “blips,” then tell the captain, “Incoming bogie at two o’clock,” and the captain would instruct the crew to “Man all battle stations.”

We humans are wired for two things: survival and reproduction. In order to survive and reproduce, we are programmed to scan for and react to incoming bogies—only, they don’t have to be enemy warplanes or missiles but can be extremely subtle potential threats. (For example, “The boss just gave me a dirty look” or “I can’t find my cell phone”—both of which the voice in our head may tell us is a threat.)

Before text and email, many incoming bogies would appear via phone or postal mail, which rarely required an instant response. However, today we have a never-ending flow of digital messages that expect immediate attention.

All of Us Want to Be Good Tribe Members

For survival and reproduction during our hunter-gatherer days, when we lived in small tribes and needed the protection and support of other tribe members to stay alive, our central nervous system was designed to help us keep ourselves in good standing with our tribe.  In that situation, belonging to the tribe was essential to survival. Today, we are still wired the same way. In fact, nothing in our programming has changed except that back then we had only one tribe to stay in good graces with, while today we have many tribes to satisfy: family, friends, business, and community.

My wiring is geared to respond quickly if anyone in my tribe reaches out, as I want to keep my standing in the pack solid, and I’m always on the lookout for incoming digital bogies from a tribe member. Whatever else I’m doing, this keeps bringing me back to checking digital communications.

Digital Technology Is Our Future

The quantity of digital communication today is a precursor of an even greater volume tomorrow; it’s growing at an exponential rate. We are already on the doorstep of a future when objects like refrigerators or even toilets communicate digitally to tell us to attend to problems… which, of course, means an unlimited source of new incoming bogies!

In my opinion, the way we should view this is summed up by a Zen aphorism that says, “It’s easier to ride a horse in the direction it wants to go.” Like it or not, digital communication is the way the universe is flowing. Resisting it won’t stop it or make it change. But there is something we can do: We can create a balance between online time and offline time.

To create a richer life, humans need the satisfaction and fulfillment that comes through face-to-face, voice-to-voice interaction. For those of us who feel we always need to be connected digitally, developing a balance between offline and online time is similar to developing muscle tone. Like training at the gym, it requires resolve, attention, and time. Training to be in the “here and now” personally as well as digitally helps us find emotional balance.

If you feel the need to be connected 24/7, committing to taking time offline is, at least initially, just like setting foot in the gym for the first time. It requires a mindful choice. Also like going to the gym, the more regularly we take time offline, the easier it becomes to do.  And by practicing mindfulness with our digital technology, we get to truly experience the many facets of our life.