Getting the Most Out of Life in a Digital World

Why Do We Make It Personal?

I’ve fathered five children in this lifetime. I have two daughters from my nine-year first marriage, and a daughter and son from my 27-year second marriage. My third and oldest marriage, with my business partner, is still going after 43 years, and our child is Westwood Financial Corporation, a real estate company with over 100 properties and nearly the same number of employees, and partners who’ve invested in the properties and are our extended family.

My daughters and son have all left the house, choosing their own life paths, and that’s as it should be. The business is still vibrant, and my business partner and I share joint CEO responsibility. But instead of our “child” leaving us, it’s been trying to tell me that it’s time for me to leave, so that it can find a path of its own. I’ve been resisting, while my partner longs for the time when he can say “mission accomplished.” I just never thought of myself as leaving the business that we started and have worked on together for over four decades. The two of us have been struggling to resolve these diverging longings for years now, and lately it’s been hard to do so in a truly loving way.

I’m blown away as I reflect on how my partner, Howard, and I started out. I was 27 and he was 30. I’d been a “one-man band,” cobbling together a portfolio of about 15 small apartment houses in Los Angeles, totaling 350 units, while Howard was a founding partner in one of Los Angeles’s earliest financial planning firms with great success and a large staff. He had become tired of a corporate environment and wanted to start a similar but more boutique firm, while I was tired of working solo out of an office I’d built onto my garage and was ready for an outside office with a staff and a partner who enjoyed raising money.

By 27 I’d raised a lot of money from family, friends, and a young CPA/attorney/business manager for real estate investments, and yet I disliked asking people to invest with me. I knew I  was honest and felt my deals were sound, but while I was very excited by the process of finding properties and negotiating for them, every time I had to raise money to buy them, I felt self-conscious about asking. Having a partner to raise money, which would allow me to concentrate on making the deals, was perfect.

In our first month of operation, we syndicated (that is, we formed a partnership with investors to acquire) a 27-unit apartment house, and we repeated the process over and over for the next 20 years until a time came when my partner told me, “People work for either money or satisfaction, and I have plenty of money and am getting little satisfaction from constantly taking on the responsibility of more and more properties.” This was the first time I realized my feelings about our business were different from his. 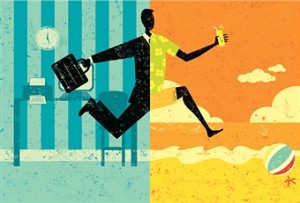 Stages in the Life of a Business

Growing a business is similar to starting a family. First we are young, energetic, and open to all possibilities. When you have little to lose, it’s easy to make bold moves. Then the family grows with a kid or two, a house, and loads of responsibilities, and the risks start to look bigger.

In a family, if you’re lucky, the kids grow up, leave to start their own independent lives, and the parents become empty-nesters. Not so if you’re lucky in a business! Our properties, employees, and partners are our children and extended family, only they NEVER leave home; they always demand a parent or parents to say, “The buck stops here.” Someone always has to make decisions—and that can be a very seductive situation for someone like me who thrives on stimulation, being in the driver’s seat, and making deals.

There is a line in the Paul Newman classic film about professional pool players, The Color of Money, when the young hopeful asks Newman, the old master, why he still wants to play pool when he makes big money at his business. Newman says, “Because won money is much sweeter than earned money.” Although the money from our real estate company comes from work and is earned money, I enjoy deal-making so much that it always feels like “won money” to me. That’s why I’ve never wanted to stop doing new deals where there is a chance to win the next round, as opposed to leaving the game and clipping my coupons—and yet my partner of 43 years looks forward to a life without the nagging responsibility of continuing to father our business.

I think this divergent point of view lives in one form or another in many long-term marriages. Among the people I know who’ve been married for a long time, I’ve noticed that eventually there comes a time when one partner wants to take a beach vacation in Hawaii while the other fantasizes about exploring a new exotic spot. How do we handle that stage in a long-term relationship?

A Lesson from Movie Night

Recently, I remembered an old movie, The Sunshine Boys, written by Neil Simon and starring the late Walter Matthau and George Burns, and released in 1975. It is about two old vaudeville performers whose act stayed on stage for 41 years before they broke up, and who are asked to reunite for a nostalgic television appearance after not having seen each other for a long time because their breakup caused a hateful rift between them.

I live with my girlfriend and my 95-year-old mother, and we have a weekly popcorn and movie night at home. A couple of weeks ago I insisted on seeing The Sunshine Boys. Life imitates art, and art imitates life! I was astounded watching the two elderly vaudevillians fighting with what was left of their life’s energy, hating each other after having worked side by side and enjoyed such incredible success for so many years.

Each character was a well-crafted composite of both my partner and me.

Throughout two-thirds of Neil Simon’s fabulous, hilarious script, I heard Matthau’s character ranting about his perception that Burns’s character was always taunting him, while Burns ranted about how Matthau was always like a nagging and demanding wife. The one thing they agreed on was that the other was a superb and masterful performer, the best in his class.

By the end of the film, I got that both men were simply wired differently. One was  wired to feel that the thrill of the hunt and bagging the kill was the pot of gold at the end of the rainbow, while the other felt that a fine chair in front of the fireplace with his grandchildren was the prize. I finally came to see that their issues weren’t personal. Their egos just had to make it personal in order for them to separate from each other and each other’s will.

I love that art imitates life and life imitates art.