Why I Love Painting

I never thought of myself as a writer or an artist until I was in my 40s. It never occurred to me I had a talent for either. But I did know that I felt like there was a void in my life – a vacuum, an internal pain. By my mid-40s I knew that my wife and kids, much as I loved them, couldn’t fill the void or heal that pain, that it was something I had to do myself. I got to a low emotional point, and it was a little like being in emotional quicksand, and I needed something to hold onto so that I would not fall deeper. 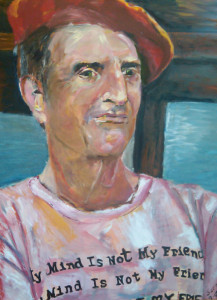 At that time, I was into my head and filled with judgments and interpretations about “this is right” and “this is wrong,” and it centered on a lack of connection in my life and what would be “right” for me to grip onto that I could be passionate about. Whatever it was, it had to be complementary to my being a family man and a business man, so I knew that chasing girls and running away with the circus were off the table.

I saw an ad for art classes at Beverly Hills High School. Even though I didn’t think I had any artistic talent and the last time I’d done art work was in third grade, I decided to take the class. It felt like I was in a retirement community as I was 20 years younger than the next youngest person. (P.S. Twenty years later, I had the reverse of that experience in acting school, when I was 20 years older than the next youngest and 40 years older than the youngest!)

It turned out that I enjoyed the art class. The teacher put lots of magazines, crayons, colored pencils, and children’s water color sets on the table and told us to find an image in a magazine that we likedand to draw or paint it. It wassweet sharing with the older people in the class.

I didn’t think I was particularly good, but I had fun and it was better than watching television. The class lasted for three months and then I had enough confidence to take a class at UCLA Extension, where I found a wonderful teacher who recognized an artistic talent in me long before I saw it myself. That was 20 years ago, and today I paint several hours every day.

My experience has convinced me that everyone has talents they may not have discovered yet and that are worth exploring.

The best part of painting for me is that once I start, I quickly get into a “zone.” It’s the same zone that I experience while running or meditating. I believe it connects me to my Higher Self and the collective unconscious that pioneer psychoanalyst Carl Jung talks about and that the voice in our head doesn’t acknowledge.

The voice in our head has a tendency to want to be the boss, to be center stage, in the limelight, 24/7, with no competition. Painting gives that voice in my head a “chew toy” just like I give my dogs when I want them to be occupied with something. When I paint, I generally do portraits. My mind is occupied in the same fashion as if I were doing a very intricate crossword puzzle and becomes absorbed in an endless “chew toy”-fascination with painting. A common joke around my house is that I get “kidnapped” with and by my painting so that I’m late for dinner. 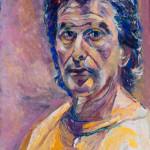 This kidnapping dis-empowers the voice in my head, allowing me to exist in a super-peaceful manner.  My self-critic lets go of everything with the exception of an endless need to question if I’ve gotten the image I’m painting correctly.  This becomes a wonderful exercise for me for being mindful and reminding myself that my job is to enjoy the process of painting and to know that the painting I’m doing is my personal creativity from the depths of my self-expression.

Imagine what went through Picasso’s or Jackson Pollock’s  mind’s machinery when their work product, their paintings, so incredibly new for their time, seemed completely out of the box of what art critics had seen and praised in the past.  They had to be who they had to be; their souls could not be satisfied with the regimen of painters past.

Painting gives me the opportunity for my Higher Self to play and to let go of the nuts-and-bolts concerns of the day that my machinery can’t let go of on its own, because it is ever-charged with the responsibility of keeping me safe from all the boogie men that, when I’m on automatic pilot, I believe are hiding in the closet of life, waiting to get me.  Painting allows for unopened windows to open, allowing the fresh breeze of life itself.