Recommending a Book That I Love

FILMS THAT, FOR ME, HAVE STOOD THE TEST OF TIME

What I Learned in Acting School

When I was 58, I saw my friend Gilbert Segel, a very prominent business manager and a few years older than me, as a featured actor in a prime time TV show. I was impressed and it looked like he was having a great time. I was looking to spice up my life, and seeing him on TV gave me the idea to follow in his footsteps and try acting. I asked him how he did it, and then signed up at the same acting school for a two-year course that taught the “Meisner method.”

The school was on the second floor of a nondescript office building and its offices were tacky, but it was filled with attractive young people mingling with each other and excited about acting. I thought “This is my way of running away and joining the circus,” and I enrolled.

The first night of class arrived and I felt like a “fish out of water.” I went to the room I was told to go to and saw that there were twenty uncomfortable-looking folding chairs and one tired old overstuffed chair that looked like the kind you find on street corners in New York, waiting to be recycled by students passing by. Most of the folding chairs were filled by twenty-something- year-old Hollywood hopefuls, and although I was 58, I immediately felt like 158, and thought, “What the hell, I’ll go for the comfortable Archie Bunker chair.”

Ten minutes later, my teacher, Elaine Williams, a tall, statuesque black woman with long dreadlocks, came into the class, greeted us, and politely told the 158-year-old to get out of her chair. My acting career had started.

Within ten minutes, she had explained legendary acting teacher Sanford Meisner’s concept of “repetition.” She said that the first year of the class would be based on repetition; for me, she might as well have been speaking Martian. I had no clue what she was talking about. She told us to pair up, and, two-by-two, we would take our places on the stage. One of us, she instructed, would then make a simple observation about the other, and the second person would repeat it back to the first person, who then would repeat it back to the other, and so on.

The moment I heard “pick a partner,” I was emotionally right back to being an overweight kid in the sixth grade who was the last person picked to be on the kickball team. Here I was 58, and fearing no one would choose to partner with me. What twenty-something-year-old would want Methuselah as his or her acting partner?

Much to my surprise, a beautiful young woman chose me to go onto the stage with her. The teacher told her to start, and her observation was “I like your shoes.” Now my shoes were older than her–the classic1960s loafers with tassels that I’d worn since college. No one under 50 had those shoes; all the other students were wearing the same Doc Martens that I took my kids shopping for.

I followed the instructions and repeated “I like your shoes” back to her, but I did it with the emotional tone of, “Are you making fun of me?” She picked up my implied question and responded back, “I like your shoes.” and I got that she was sincere and really liked my shoes.

My internal dialogue said she was being kind to me in the way she would have been to her grandfather. We repeated the phrase to each other at least ten times. I fell asleep that night with a smile on my face, as if I had won a Gold Medal at the Olympics.

Now, a decade later, I realize that repetition was all about being in the moment. It didn’t make any difference what the first person’s observation was; the exercise was a way of staying in the “now” – the present — with your partner, hearing what she or he is really saying as opposed to what you expected to hear.

This lesson had great impact on me. In our daily lives, frequently we don’t listen carefully in our interactions with others, and as a result we hear what we expect to hear and see what we expect to see as opposed to truly listening and seeing. More often than not, this phenomenon makes us misinterpret what is actually being said, which tends to suck the aliveness and joy out of life.

Now I look back on my first day of acting school and see how past-based I was in my thinking when I saw myself as an undesirable scene partner — how I mistakenly brought back my self-conscious and unhappy overweight kid self,even though I was no longer that person.

I also now see that I wasn’t even that person in sixth grade; I was just another kid who was chubby as opposed to being defective, which is how I saw myself at that time. As an adult, I brought that sense of defectiveness right into my acting class. Looking back, I see that I could have said to myself,“Wow, these kids are going to admire someone twice their age having the guts to put himself out there as an actor.”

At the end of the two-year period, I had made many friends, and was just another member of a family of 25 actors.

That two-year class was one of the favorite periods of my life. For me, it was living on the edge and reinventing myself and truly being in the present. Who needs to live in a past that will never be again at the expense of aliveness and joy that is constantly available in the now?

Meisner’s definition of acting is to be real in imaginary circumstances. That’s what life is – only we think it’s real and not imaginary!

I also learned Meisner’s understanding of a “through line.” An example of this is John Wayne, whose through line throughout his acting career was that of the strong, silent, courageous type of man.

I realized that we tend to create our through lines in life, and even though we may not like them, we may feel we can’t change. For example, the “responsible businessman” whose through line confines him to a life of playing his part like Scrooge in A Christmas Carol as opposed to the way of Richard Branson, founder of Virgin Records and Virgin Atlantic, whose through line, in addition to being a brilliant businessman, is to be a charming and adventurous thrill seeker.

Bottom line: Ask for your limitations and they will be granted; I prefer a life with a through line of endless possibilities. 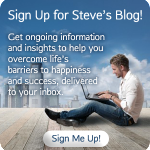