Now Available: Your Mind Is What Your Brain Does for a Living

The Story of Adam and Eve 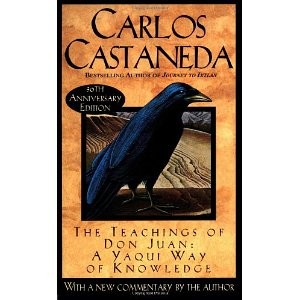 On Tuesday, my new book, Your Mind Is What Your Brain Does for a Living: Learn How to Make It Work for You, was released, and it made me think about the path that brought me to writing a book about mindfulness and how we can use our mind to rewire our brain. Looking back, I see that as a teen I already had the curiosity of a searcher for life’s wisdom, but the first books that “hooked” me were by Carlos Castaneda, and I read them when I was in my early 30s. It was the hippie era and Castaneda’s writing was at the forefront of the counterculture of the time.

I started with The Teachings of Don Juan: A Yaqui Way of Knowledge. In it, Castaneda, a UCLA anthropology student, describes meeting a shaman, don Juan, a Yaqui Indian sorcerer, while on a dig in the Southwest, and soon after becoming don Juan’s apprentice in Mexico. The book is mysterious, mystical, and fascinating.

I’ve found that the times in my life when I’ve experienced the biggest BREAKDOWNS have also been the times when I’ve had the biggest BREAKTHROUGHS. The Teachings of Don Juan came into my life in one of those breakdown periods. It was the same year my marriage broke up, I started therapy, and participated in the human potential workshops EST and MindProbe. The Teachings of Don Juan was profoundly important to my growth.

As the years rolled by, Carlos Castaneda kept writing and I kept reading and found his books to be guides in my search to be a powerful and effective person. In the decades since his books were published, people have debated whether Castaneda’s accounts actually happened, but regardless of whether or not he studied with a Yaqui sorcerer, the teachings he wrote about in his book remain valuable life lessons that I find are a part of me.

“The Man of Knowledge”

At the center of The Teachings of Don Juan is don Juan’s discussion of being a “man of knowledge,” the principles of which apply to women as well as men. Don Juan identifies four enemies of the man of knowledge: fear, clarity, power, and old age.

As we embark on the path of learning, don Juan explains, inevitably what we learn doesn’t match our picture of what it will be, our learning creates conflicts for us, and we become afraid. Thus our first enemy is fear. If we let fear take us over and we flee the path of learning, then fear defeats us, and we don’t learn. If fear wins, in our whole lifetime we will never learn, so it’s important to defeat this first enemy.

According to don Juan, the way to conquer fear is to allow ourselves to experience our fear and to proceed to learn anyway. We do this, don Juan says, one step at a time, but when fear is conquered, it is conquered once and for all—because we conquer fear with “clarity of mind.” This clarity of mind helps us proceed with intent despite our fear. So conquering fear doesn’t mean not feeling fear; it means having the clarity of mind to move forward even while experiencing it.

But clarity itself, don Juan says, is our second enemy. He explains that while it dispels fear, clarity can blind us, because with clarity we become so sure that we can do whatever we want that we do it quickly and constantly, without realizing that we still have much to learn. If we become blind in this way, we will retain that clarity, but we will not be able to learn anything else. In this condition, we will never become a person of knowledge; according to don Juan, we may become only a “buoyant warrior, or a clown.”

In order to not be defeated by clarity, we need to use it more patiently and, in a sense, skeptically, reflecting on what we are seeing, making sure that we are clear about it, and then proceeding cautiously. When we do this, we attain real power. And power is our third enemy.

Don Juan tells Castaneda that power is the most potent enemy. A person with power is indomitable, and gets so used to having the power that, without recognizing it, that person can become mean, insensitive, and concerned only with what he or she wants. Just as a person blinded by clarity can never proceed to become a man of knowledge, don Juan explains that a person overcome by his or her own power stops learning. However, if the person is blinded only temporarily by power and doesn’t give in, then “the battle is still on,” and that individual can still proceed to become a man of knowledge.

To defeat this third enemy, don Juan tells Carlos, an individual has to recognize that “the power he has seemingly conquered is in reality never his. He must keep himself in line at all times, handling carefully and faithfully all that he has learned. If he can see that clarity and power, without his control over himself, are worse than mistakes, he will reach a point where everything is held in check. He will then know when and how to use his power. And thus he will have defeated his third enemy.”

Our fourth enemy, don Juan says, is old age. When old age comes, even if we have conquered the enemies of fear, clarity, and power, we human beings want to rest. If we yield to this desire, don Juan explains, our fourth enemy will win. We will become old and weak; our desire to rest will overtake our clarity of mind, our power, our knowledge.

To conquer old age, don Juan instructs, we have to battle against it, to cast off tiredness and “live [our] fate through.” Then we can be called “a man or [woman] of knowledge, if only for the brief moment when [we] succeed…in fighting off [our] last, invincible enemy. That moment of clarity, power, and knowledge is enough.”

My way of thinking about this is that we never really “own” what we have learned; we only “rent” it. We have to “reboot” ourselves all the time, renewing our lease on what we’ve learned. In other words, we have to keep working to be mindfully aware and to use the lessons that we’ve learned on the path to becoming people of knowledge.

Don Juan’s teachings remind me to not let fear stop me, to not become blinded by clarity and power, and to not stop learning, whatever age I am; that becoming a human of knowledge is a lifetime commitment, and one that I need to commit to moment by moment.