A Life Lesson That Works

The Story of Adam and Eve

The story of Adam and Eve is a great metaphor to help us understand how our minds work. When Adam and Eve lived in the Garden of Eden they lived in a state of pure beingness, experiencing complete harmony, without worry, fear, or the need to protect themselves or strategize for their survival. They were always in the now, the present, connected to each other, to 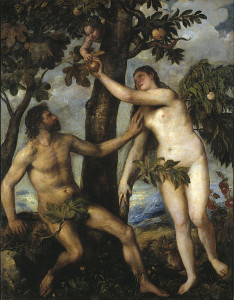 state for eternity were it not for the serpent tempting them to disobey God.

As a result of eating the forbidden fruit, Adam and Eve were thrust out of Eden and became the first mortals, and with that came the need to survive. All at once the world contained threats, and they needed a mind capable of preemptive, defensive thinking, a mind able to anticipate, to identify, and to judge everything they encountered in the outside world. This became the voice in their head as they emerged from Eden.

Adam and Eve’s fearless days lounging around the pool in the Garden of Eden without a worry or care were replaced by experiencing their lives with the commentary of the often-critical voice in their head as it attempted to help them with their constant struggle for survival. From that point forward, humanity rarely experienced harmony.

As Adam and Eve’s descendants, we have inherited the same kind of judging mind that scans every situation, evaluating everyone and everything as it looks for threats and tells us what to think and to feel about ourselves and the world outside us. The mind has become our central command center. When the mind is on automatic pilot, preoccupied with scanning and evaluating, I refer to it as our machinery, which speaks to us through the voice in our head. It’s like having a constant GPS voice just like the device in our cars, except instead of telling us, “Turn left in a quarter of a mile and you will arrive at your destination,” it tells us what to think and how to act and feel. The machinery that triggers the voice is still programmed to attempt to ensure your survival at any cost, whether it’s telling you how you should flirt with someone you’re attracted to or how to talk a traffic officer out of giving you a ticket when he just pulled you over for a rolling stop.

Generations after Adam and Eve, our cave-dwelling ancestors were hunter-gatherers living in tribes in the era of woolly mammoths. Back then, humans needed to live in tribes to survive, and they knew that being shunned by the tribe was a probable death sentence. As a result, the human mind became programmed with techniques designed to keep one’s place in the tribe. Many, many millennia have passed since then, but our machinery is still programmed the same way. We can still experience the possibility of being rejected or disapproved of by others as a matter of life and death, and often we continue to react to those perceived threats in unnecessary ways that are inappropriate and unproductive, creating a lot of col¬lateral damage to our relationships.

The most important words in the previous sentence are “experience . . . as a matter of life and death”; what our minds—fixated as they are on survival—may perceive momentarily as a life-and-death matter is often nothing of the sort.