A New Way of Looking at Consciousness

I was in an important meeting a few days ago with a business associate. Our relationship has been strained, so we are using a psychologist to facilitate our talks to resolve a disagreement, and she was in the meeting, too. The day after the meeting, the facilitator emailed us her summation of it. I was taken aback to find that her summary stated that I’d agreed to a point I had not agreed to.

I called her, wanting to understand how and why she had misjudged the situation. To my surprise, she explained that my associate had asked for my agreement to his proposal and then he’d discussed the proposal for a long time. The facilitator watched me listen silently and interpreted my silence as approval. Actually, I did not approve of my colleague’s proposal; I disagreed with it but was willing to listen and mull it over.

Though I thought it was inappropriate for the therapist to interpret my silence as agreement, I understood how my silence gave her the opportunity to misinterpret my point of view. This made me think about silence as a communication tool—when it helps and when it’s a hindrance.

When I Go Silent

As I’ve learned to reflect on my behavior, I’ve come to understand that during situations involving disagreement or conflict, my anxiety can 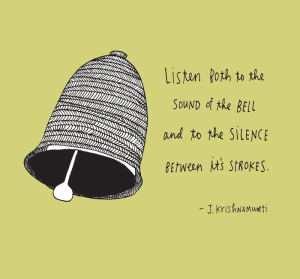 unconsciously shut me down out of fear that my responses will exacerbate the situation. To not appear defensive or aggressive, I remain silent.

There are other situations in which I am silent as well. For example, sometimes my discussion partner starts a dialogue where it sounds like he or she is asking for advice but I sense that the person really just wants to vent and to receive my empathetic response. Prior to becoming sensitive to this, I generally used to go into problem-solving mode; now I realize that compassionately making space with silence is often the best thing for a friend to do.

Pioneer psychoanalyst Carl Jung defined a complex as a complete mini-pattern of autonomous behaviors that lives in the shadowy recesses of the unconscious and can kidnap your reactions without your being aware of it. Jung believed that complexes result from our childhood emotional traumas. Examples are mother complexes, which tend to affect a person’s relationships with women, and father complexes, which tend to affect relationships with men and authority figures.

When Jung says that a complex is autonomous—he means that it operates on its own; we’re not aware that we have the complex, how it affects us, or when we are in it, and yet it has the power to possess us.

The most problematic part of being in a complex is that we lose touch with everything that is going on in the present; nothing exists for someone in a complex outside of his or her immediate, intense perceptions and emotions. These are the times people say things like, “You never loved me”—forgetting all the love their partner has shown them and the good things their partner does for them. While in the complex, it’s as if those good things never happened.

When I’m with someone who is that worked up, I realize that nothing I say or do will get through to them—so silence becomes a helpful tool. I know that we can talk later, when the person is no longer in the complex.

These days I can get emotionally activated—kidnapped by a complex—by reading upsetting emails or text messages, These can trigger in me the same upsets as voice-to-voice or face-to-face communications can, and I’ve learned that at times like these, silence can be helpful. I’ve trained myself to wait at least two hours before responding to these digital communications so I can regain my emotional equilibrium, reflect on the message with objectivity, and respond mindfully instead of defensively. The payoff of doing this is a better chance to negotiate differences of opinion, and more harmony in my relationships.

Self-Expression Is the Key

I believe that full self-expression—communicating how we think and feel—is the key to good relationships, and that it’s most effective when the comments are thoughtful and presented in a positive way. Silence can be an appropriate part of how we handle ourselves as we process situations that trigger conflict in us, but as I’ve learned, we have to be mindful about how we use silence so that we won’t be misinterpreted.