Sunday Breakfasts with My Mother

I swim for 50 minutes five days a week and am fortunate to have my own pool.  The plaster surface of the pool disintegrated with age, and recently I needed to have it resurfaced.My friend Alex recommended someone who had just re-tiled his pool. When Tom, “the Desert Glass” guy, came to my house to bid the job, he saw several of my oil paintings and mentioned that if I wanted, as part of re-tiling the pool,he could include mosaic pictures of whatever I wanted.  I immediately liked the idea and started thinking about how I could turn my pool into a work of art. 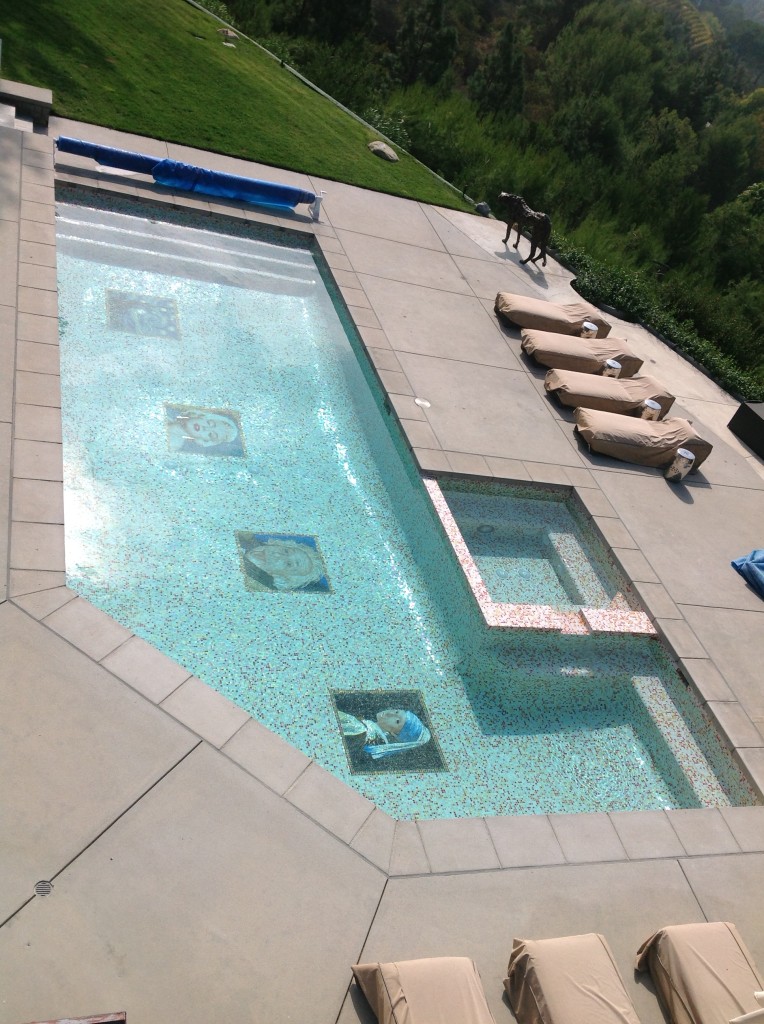 As a painter, initially I thought of using some of my own paintings as images for the mosaics, but they are very personal—mostly of family members and friends or self-portraits or of symbols from my life—and, as a man who’s spent his professional life in the real estate business, I also thought practically and realized that these images might not appeal to potential purchasers of the house if and when I want to sell it.

I finally settled on four iconic images that have personal meaning for me and perhaps for others as well.I chose Albert Einstein,Marilyn Monroe, and the paintings Girl with a Pearl Earring by Vermeer and Starry Night by Van Gogh.

I’ve always had a fascination with Albert Einstein. He must have been“wired” in an extraordinary way—the ultimate “out-of-the-box” thinker who reshaped our understanding of the universe with his observations and theories in physics.His biographies tell of a man who had complicated relationships and never truly felt like he fit in.I’m not comparing myself to Einstein, of course, but even though I have a fulfilling life, with lots of family, friends, and business colleagues, I identify with not fitting in. To me, not fitting in doesn’t mean you don’t fit; it means that you’re aware of the adjustments you have to make in order to fit in.I’ve read about baby animals that have been adopted by a different species, like a cat that’s raised by a dog. Sometimes I feel like that.Einstein was a genius who knew the kind of differentness many of us feel. Seeing his mosaic image fills me with admiration and compassion for him.

Marilyn Monroe is another outlier.She was a huge star when I was growing up, with a reputation for being high-strung and emotionally delicate.When I was a child and teenager, my mother, like millions of other American women, dyed her hair blonde and had it styled liked Marilyn’s.My first acting job was playing Marilyn’s psychiatrist in the television movie Marilyn:The Untold Story.In the scene, Marilyn poured her heart out to me as her psychiatrist, wailing her grief over Clark Gable’s death, just before taking her own life. It was very familiar to me; it was like listening to my mother’s wailing grief after my father’s death.It was also surreal—because it was like seeing the real Marilyn Monroe and my mother at the same time.Marilyn Monroe was the epitome of both glamor and fragility.

I chose Girl with a Pearl Earring by Vermeer for two reasons.First, I love the painting, and second,because artist David Hockney wrote a book,Secret Knowledge,about his theory that starting in the early Renaissance many artists used optical devices—the camera lucida, the camera obscura, and curved mirrors—that enabled them to project an image onto a canvas to draw it by tracing the projected image before they painted it. Hockney and physicist Charles M. Falco, who specializes in optics, worked together to analyze visual details of paintings by the Old Masters, which led them to believe that the artists used these optical aids to create the uncanny realism in their paintings.

My talent as a painter is with color and story,but I don’t have a natural ability to draw, so for me drawing is a learned skill rather than a pre-wired,direct-from-the-factory ability.My style is to take a ton of photos of a subject and then look for one that captures something special and work from that photo as well as the others for reference. Often, instead of drawing a picture freehand, which could take me days, I’ll project the image from the primary photo I’ve chosen onto a canvas and trace it to create the “under-drawing.”That phase takes me 30 or 40 minutes,while the actual painting can take me three or four months.In the past, I had secret shame about this, as if I was cheating by doing it this way.

When I went to an exhibit where Hockney made his point with the actual paintings he analyzed and he explained his theory hypothesizing that Vermeer used an optical tool and traced his under-drawing for Girl with a Pearl Earring, it freed me from my self-critic’s shame. I love the idea that our early iconic painters may have employed a similar technique, using a camera-type mechanism about 150 years before the invention of a camera that could take a photograph. 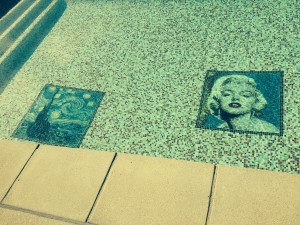 The fourth image I chose was Van Gogh’s Starry Night. It has always been one of my favorites; it’s powerful, wildly original, and painted with violent emotion. Van Gogh’s style was out of the box for his time; he was another outlier. His self-critic must have been incredibly severe, ultimately causing self-mutilation when he cut off his ear and, depending on who you believe, causing him to take his own life.Seeing the painting fills with me awe for Van Gogh’s talent and empathy for the pain he suffered.

Every time I glance at these images on the bottom of the pool, I am thrilled to have turned my pool into a very personal piece of art. From now on, I’ll have 50 minutes a day of inspiration while I do my laps