My Favorite Books – Part I

Your Perspective Deter­mines your Perceptions

Look at the following drawing (designed by early-twentieth ­century Danish psychologist Edgar Rubin), which can be perceived as a white candlestick against a black background. 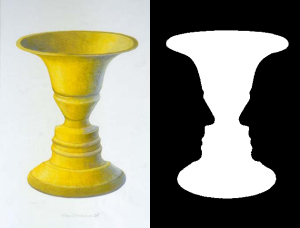 Now look at it again and flip your perspective so you see it as a silhouette of two faces in profile, their noses, lips, and foreheads almost touching. When you view it this way, the white candlestick is now the white background behind the two faces. All it takes to totally transform how you see the drawing is using mindfulness to switch your focus and see the picture in a different way.

When we’re on automatic pilot, it doesn’t occur to us that what we’re seeing (and hearing) is an interpretation based on our machin­ery’s perceptions. We don’t realize that we can flip our perspective by letting go of the Organizing Principles that are filtering and determining our initial perspective. But if we do so, we will per­ceive in a different and—in the case of letting go of our Organizing Principles—a more accurate way.

The most insidious thing is that the more unconscious you are of the beliefs that make up your Organizing Principles, the more power they have over you. The more entrenched you are in believing that they are facts and not beliefs, the less likely you are to question them. When you don’t recognize that your beliefs are instructing you about how to hear and see the world, you get locked into seeing the drawing as a candlestick; the thought doesn’t enter your mind that you could flip your perspective, look at the drawing differently, and see it as profiles of two faces.

This image has been released into the public domain by its author, John smithson 2007 at the wikipedia project.