How Childhood Traumas Influence Your Programming

Will We Ever Learn to Be at Peace?

Last week got back from Israel, on what was my third trip there over the last 20 years. My strongest impression this time came from a visit to Beit Guvrin-Maresha National Park, which encompasses the ruins of Maresha, an ancient city of Judaea. 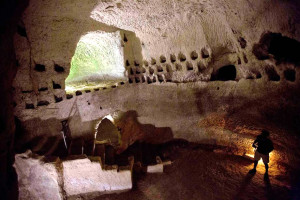 This is a working archaeological site, with thousands of man-made caves, most of which hold artifacts dating back to Biblical and Roman times. Among the archeologists’ discoveries are cemeteries, factories, storage rooms, baths, and hideouts as well as domestic items needed to live during those times.

After visiting the site, I went back to my hotel, where I watched CNN and saw descendants of those same tribal-based hatreds once again splitting apart Iraq, and it occurred to me that in another few hundred years, archaeologists will be sifting through this same region and coming up with the same results, unearthing artifacts from today’s fights over the same lands.

Later, in another part of our trip, we visited Israel’s high-tech industries and saw genetic engineers working on cures for cancer and other serious diseases with the aim of saving lives. These are the two sides of our human condition, pushing mankind both to wage war and to save and prolong human life.

Several years ago, Ray Kurzweil, in his book The Singularity Is Near, opened my thinking to the concept that intelligence is the currency of the universe—that everything moves forward through time with the objective of creating more and more intelligence.

Thus genetic engineering and nanotechnology—devices built on a molecular level—are just as natural for human beings to produce as the technologies of war; it’s all part of the evolution of our bodies and brains. In the future, when nanotechnology is implanted directly into our bodies to enhance our intelligence and health, human beings will become what some science fiction writers have called cyborgs, advanced creatures with greater abilities produced by technology.

After seeing the archaeological excavation at Beit Guvrin-Maresha National Park, I was left with the question, Is one society declaring war on another just a different and very cruel and clumsy aspect of evolution, and will intelligence evolve to the point that we as a species move past our fears and therefore no longer need to kill each other, and instead learn to cooperate and work together to solve the problems that connect us all?