“Self-Transformation and Your Brain”

Passover, a Jewish holiday that generally comes around the time of Easter, commemorates the Israelites gaining their freedom from bondage in Egypt, as told in the Book of Exodus in the Old Testament. Most Jews celebrate Passover with a Seder, a traditional dinner for family and guests with the purpose of retelling the story of Passover and applying its lessons to the world today. 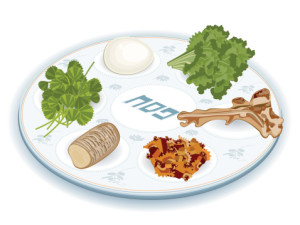 Each of these special foods reminds us of an aspect of the Israelites’ experience, from the bitter experience of slavery to G-d freeing and protecting them in their escape from Egypt and  eventually returning them to their homeland. There is a tradition of inviting guests, including strangers, to remind ourselves that we were once “strangers in a strange land.”

My Changing View of Passover

My first memory of a Seder is of the one I attended when I was about five, at my father’s parents’ house. I remember it as boring and taking what seemed like forever before we got to eat. My grandfather seemed like a king at the dinner. I went to a few more Seders while I was still a child until my father died and, for a long while for me, Passover died with him. I didn’t go to another Seder until I was engaged to my first wife, and her parents invited my mother and me into their family Seder community.

From then on, with some “absent due to vacation” exceptions, Seders have been a regular part of my life. Now I’m the grandfather whom some could perceive as seeming like a king, running his Seder in his home. My perception of my role in the Seder, however, is very different from that. I look at the Seder as a passing of the baton from one generation to the next. I understand now that my grandfather was playing his part as his generation did, and I’m doing it in my style—not as that of a king but as the head of a family who has the responsibility of transferring the oral history of our people to the next generation and the generations to come, with humanity, compassion, and, I hope, humor.

I remember that as a kid I was excited when I looked for the hidden piece of matzo that is part of the Seder ceremony (kind of like a Jewish Easter egg hunt), and I wanted to get the prize for finding it. Now that I’m conducting the Passover Seder, I feel moved and inspired to share the 3,300-year-old tradition of Passover with the younger generations.

The Meaning of Passover

The story of Passover reminds all faiths of the times when they, too, were strangers in a strange land, and how important it is to treat others in the way that we wish to be treated—as guests who are respected citizens of planet Earth, with all the rights and privileges that go with it.

For me, a modern Seder reminds us what it took for the enslaved Israelites to find their freedom and their own way of life, and to live by their own moral code. My Seder and thousands of other Seders focus on the parallels between the plight of those slaves in ancient Egypt and the intolerance, injustice, and atrocities found today in every part of the globe, including Syria, Ukraine, China, nations in Africa, and our own country.