Stop and take a moment to pause your machinery

Therapy and the Voice In Your Head

Dealing with My Inner Self-Critic 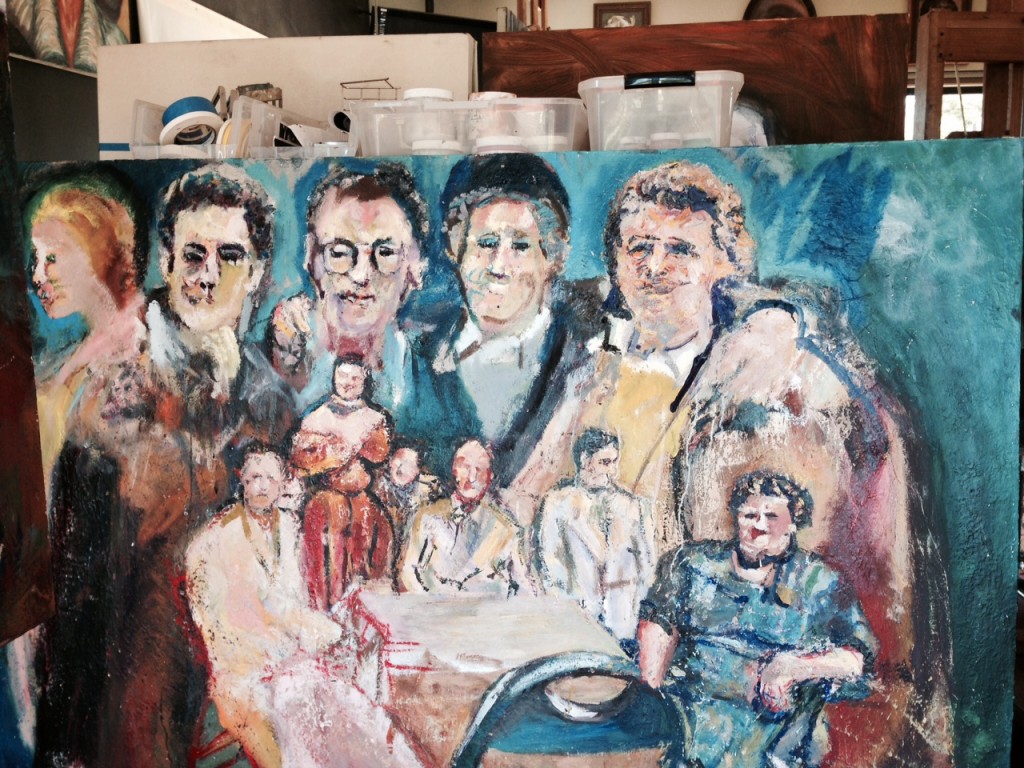 In my recent blog “A Wonderful Surprise” I talked about my newfound 30-year-old cousin, who changed his life from gangbanger to youth coach and activist, choosing a positive path in life. As part of this change, he had his gang-related tattoos covered over with ones that represent his new identity, which is reminiscent of the process I go through when painting.

My paintings generally deal with my longing for emotional attachment. I paint stories, using family and friends as my characters. I can work for months on a canvas. Often I’ll come to a point when my self-critic says, “Not working. It isn’t good enough!” and I’ll scrape off what I’ve painted, and paint over it, which continues to build the surface into thick, textured layers of paint that give the painting a tactile feeling, which painters refer to as impasto. Each time I paint over what I’ve done, I’m hoping for a better result. I’ll rework the canvas over and over, striving to achieve the likenesses of the people I’m painting so sharply that my self-critic applauds—which never happens. At some point I’ll say, “Enough,” declaring victory even if I’m not totally pleased, lying to myself that I’m satisfied.

Recently I pulled out a painting I’d started six years ago but had never finished because my self-critic had thought the likenesses weren’t good enough. It’s a four-by-five-foot canvas depicting me, my paternal grandparents, and my mom, dad, and older brother sitting at a picnic table at my cousin’s bar mitzvah, circa 1952, when I was ten years old. I painted it from a photograph, one of the few I have from my childhood.

I’d struggled with this painting for about a year before deciding that I’d never get it right and chose to change its “story” by adding images from another photograph of me and three of my lifelong friends. I’d hoped the new images would draw the eye away from the detail my self-critic hadn’t liked, which is typical of how both my paintings and my life evolve: When I get stuck, I look for new solutions to old problems. In this painting, I justified the changes with the idea that the theme of the painting was the juxtaposition of the family I was born into and the friends who have become family.

But my new addition hadn’t done the trick, and after another six months I’d gotten so frustrated that I’d put the painting away again, unsure if I’d ever finish it.

Last year I had dinner with a dear friend, Ruth Weisberg, a renowned artist and former dean at the USC Roski School of Art and Design. I was lamenting my loop of painting and repainting and never being satisfied, and asked her for advice. With a knowing smile she suggested I read the book A Giacometti Portrait by James Lord.

I couldn’t imagine why she suggested I read about Alberto Giacometti, one of the world’s most celebrated artists, but I bought the book anyway. In reading it, I was shocked and pleased to learn that he and I shared the same process of allowing our self-critics to run us. Indeed, Giacometti, I learned, ruminated in self-doubt over his ability as a painter, even while his work sold for vast sums.

How different is the internal experience of this great artist from the frustration we all feel in trying to get our lives right by covering up what we don’t like while endlessly allowing the voice in our head to whipsaw between invalidating ourselves and, if we are mindful, accepting ourselves?

We are always reworking our canvases, whether they are the skin on which we have tattoos; our relationships with our parents, lovers, and children; or our thoughts, beliefs, and mindsets.

The greatest lesson I’ve learned from painting is to accept that ultimately the painting isn’t the goal; it’s the pleasure of painting that’s the point. The joy is in the discovery. The process—not the final product—is the gift.